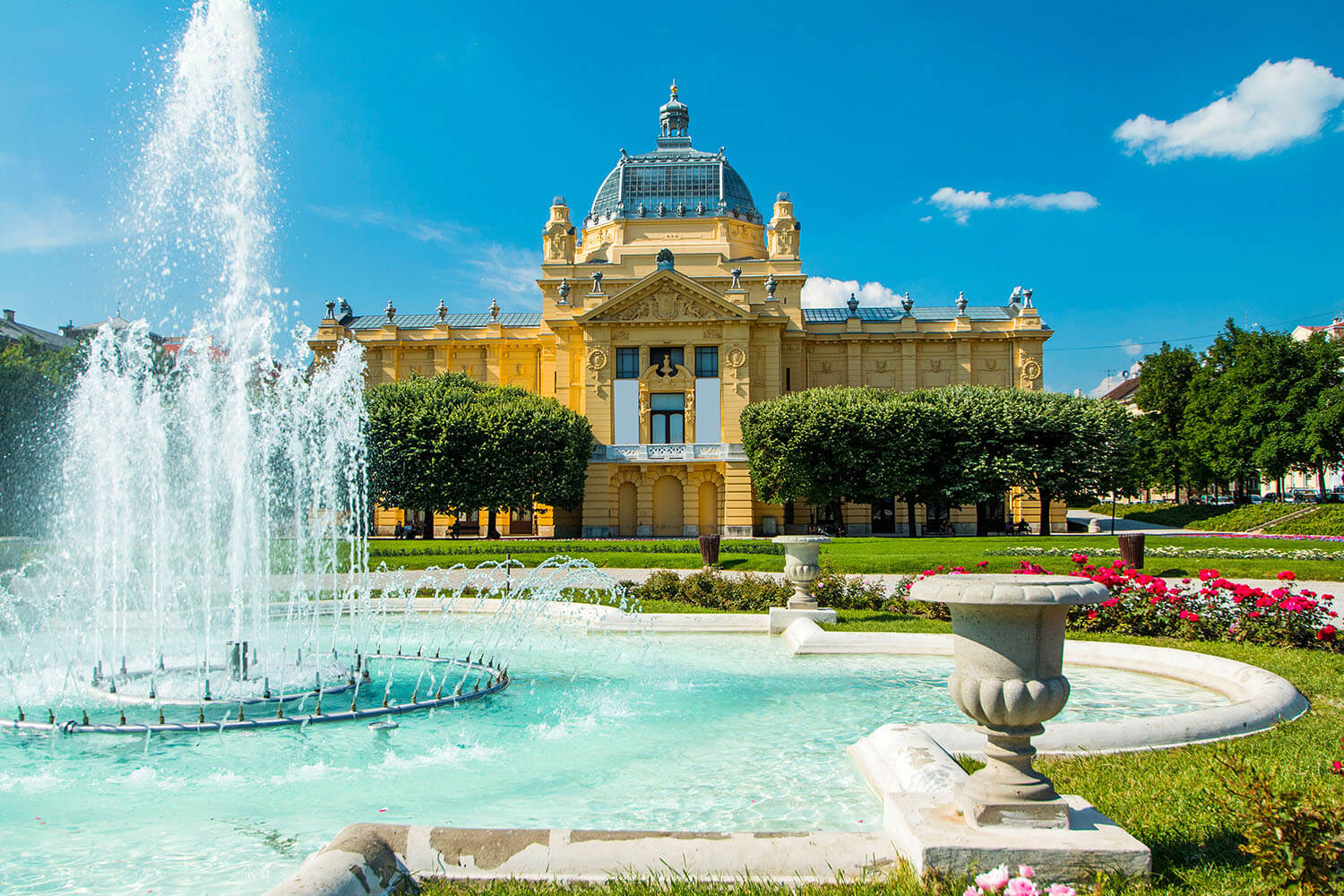 F. A. Q. about city of Zagreb, Croatia

Where is Zagreb located?

It is located in continental part of central Croatia in Central Europe.

Is Zagreb nice during winter?

Zagreb is beautiful during winter, very clean and well tasselled.

Can you see Zagreb in one day?

It is possible to visit most of the architecture, but not try traditional dishes, and also not be able to visit several beautiful museums and art galleries in just one day.

How good is public transportation in Zagreb?

It is very good and cheep.

What to do or visit in Zagreb, croatia?

There is so much to do or visit in Zagreb. You could visit Gornji grad, Lotrščak tower, Technical museum Nikola Tesla, Ban Jelečić square, museum Mimara, have fun in Tkalčićeva street, park Zrinjevac especialy if it’s winter time.

Where to shop in Zagreb?

There are Arena center, City center one or Ilica street.

How far is Zagreb to Plitvice lakes?

It is only about one hour away by car.

How many people live in Zagreb?

What to eat in Zagreb?

What is the climate in Zagreb?

How old is Zagreb?

How old is Zagreb catherdal?

It was built between 11th and 17th century.

ZAGREB – The capital and most populous city in Croatia

Zagreb is the capital of the Republic of Croatia, and the largest city in Croatia by population. Zagreb was first mentioned in written documents as the capital of Croatia as far back as 1557. The wider area of ​​the city has more than one million inhabitants. Historically, it has developed on the basis of the previous two settlements, namely Gradec ( Grič ) and Kaptol. Gradec is today also called the Upper Town and is the center of present day Zagreb just like Kaptol. Gradec or Grič is the name for the old part of the city of Zagreb on the slopes of Medvednica, from which, together with Kaptol, today’s Zagreb was born. In 1242, King Bela IV. issued a Golden Bull proclaiming the city “a free royal city on the hill Gradec, Zagreb”. From 1242 to 1266 the town was fortified with ramparts and towers, and its shape and layout of streets has changed little to this day. The city had six gates, three larger and three smaller.

Location of the City of Zagreb, croatia

Zagreb is located on the southwestern edge of the Pannonian Plain at an average altitude of 122 m, below the southern slopes of Medvednica, on the left and right banks of the Sava River. The location of the city, at the junction of the Alpine, Dinaric, Adriatic and Pannonian regions, enabled Zagreb to become a bridge between the Central European and Adriatic regions. This is also one of the reasons why we come across so many different cultures and styles in Zagreb.

Horseshoe is the name for an urban unit consisting of a series of squares-gardens in the Lower City of Zagreb. The second half of the 19th century brought great urban momentum to the development of the modern city of Zagreb from a provincial town from the beginning of the century. The development of social and cultural awareness of the city as a representative and urban center, representative of citizens and nations, set the path for Zagreb in this direction. The city of Zagreb, which until then was part of the outskirts, could finally be compared to other centers of the Monarchy – Vienna and Budapest.

The Lenuzzi or Green Horseshoe is a sequence of seven squares (Nikola Šubić Zrinski Square, Josip Juraj Strossmayer Square, King Tomislav Square, Dr. Ante Starčević Square, Marko Marulić Square, Ivan Square, Anthony and Vladimir Mazuranic Square and the Republic Square of Croatia), while within the horseshoe frame there are two more squares – Petar Svacic Square and Petar Preradovic Square. The horticulturally decorated squares are called “horseshoes” because they are shaped in the letter “u”, with the southern, eastern and western sides surrounding the center of Zagreb’s Lower Town. The Green Horseshoe is characteristic of representative public buildings and private palaces dating from the late 19th and early 20th centuries, and represents the most significant urban development in the history of Croatian architecture and urban development.

Joseph Count Jelacic Bužimski is the most famous Croatian Ban. He was born in Petrovaradin on October 16, 1801, and died in Zagreb on May 20, 1859. He was an army commander and general, Ban of Croats, Dalmatians and Slavonians from 1848 to 1859, a member of the noble Jelacic family, and one of the most significant Croatian politicians, both in the 19th century and throughout the history of Croats. He abolished agriculture and called the first elections to the Croatian Parliament. As a military leader, he won a series of battles against the insurgencies in the Habsburg Monarchy during the Revolution in Hungary in 1848. In Croatia, he is celebrated as a national hero.

Of course, as such he deserved and received a monument in the most prominent Zagreb square named after him. In addition to its beauty and the beauty of the surrounding buildings, the square is inevitably a place for large gatherings. Throughout history, there have been numerous mass gatherings, with the largest being recorded on July 16, 2018, when the Croatian national football team won a silver medal at the World Cup. More than half a million people gathered in the square on that occasion.

Petar Preradovic Square in Zagreb, named after the great revivalist giant Peter Preradovic. Among the locals, generally known as the Flower Square, by the flower kiosks traditionally located there. The square is located in the city center, about 200 meters from Ban Jelacic Square. Today, it’s a pedestrian zone. There are benches, several trees, cafes with terraces. It is a favorite meeting place, part of the city’s “downtown”. He is especially known for various gatherings of citizens.

Jarun is a large lake on the outskirts of the city used by Zagreb residents as a weekend oasis. In the summer, they go swimming there as Jarun has 5 beaches that are festooned with Blue Flags for cleanliness and equipment. Several equestrian clubs and a hippodrome are located around Jarun, so a nature excursion with a horse is a normal occurrence there. There are also numerous night clubs, disco clubs and other popular places for an evening out.

The park forest is a part of nature that is of national interest and enjoys special state protection. Maksimir is the first park forest in the region of Southeast Europe. It was founded back in 1794 at the initiative of the bishop of Zagreb and intellectual Maximilian Vrhovac. The park covers an area of ​​more than 300 hectares and is rich in wildlife. It is decorated in English landscape style. The forest also consists of 5 lakes of different origins (artificial and natural). The park is located in the city district of the same name. The Zagreb Zoo is located on the south side of the Maksimir Forest.

The cathedral is located in the oldest known locality in Zagreb, which we mentioned earlier as the basic settlement from which the city of Zagreb sprang. Of course it’s Kaptol. The Diocese of Zagreb was founded in 1094 by King Ladislav. The cathedral is also the largest Croatian religious building and one of the most valuable monuments of Croatian cultural heritage. It is believed to have originated on the site of an older and smaller church, and was built between the 11th and 17th centuries. The first and most important Gothic building in Croatia. It is the most monumental Gothic sacral building southeast of the Alps.

Lotrščak Tower is one of the symbols of Zagreb. It is located on Gradec, next to the former small town gate Dverce on Strossmayer’s Promenade. With the Stone Gate and Pop Tower, it is considered to be the best preserved object of the city’s defense system to date. At first, Lotrščak was called the Tower of the Door, but from 1646, when it housed a bell (lat. Campana latrunculorum – the bell of a robber, robber, or a distorted Old Zagreb “lottery”), it began to be called Lotrščak.

The tower, by its square footing, by its wall structure and by its proportions, is a Romanesque fortification object which, after its defensive function, adapted to the needs of various times. It got its present-day appearance in the 19th century after the remodeling by architect Kuno Waidmann. The tower is 19 meters high, the roof is five, the dome six, a total of 30 meters. In the tower is located the Grički cannon, which marks the mid day with a shot. At the top is a dome with a lookout. Lotrščak Tower is a protected cultural property of the Republic of Croatia. This tower is described in many Croatian books.

The Croatian National Theater was inaugurated on October 14, 1895, when, at two o’clock in the afternoon, Emperor Franz Joseph I, on a pillar of the balcony, and in front of numerous citizens from Zagreb and all Croatian territories, symbolically made the last blow with a silver hammer, which made it for the occasion. made by sculptor Robert Franges Mihanovic. The first festive performance, also in the presence of the emperor and numerous guests, was held in the new building at seven o’clock in the evening – Glory to Art, an allegorical “stage prologue in three paintings” by Stjepan Miletic with music by Ivan pl. Zajc, which featured the champions of Drama and Ballet, and the eighth stage pictures by Zajc’s opera Nikola Subic Zrinjski.

Ivan Zajc was the first conductor of the theater. Jakov Gotovac has been the conductor of opera theater since 1923. From 1958. Famous Croatian director Branko Gavella began his brilliant career here, as did the first Croatian prima ballerina Mia Čorak Slavenska. The Neo-Baroque building of the CNT is a masterpiece of the late historism of the Austrian architect Ferdinand Fellner and the German architect Hermann Helmer. It was built for about 750 spectators.

Ilica is one of the most famous streets in Zagreb and certainly the most popular shopping street as well as a popular promenade. Ilica is also one of the oldest and longest street in the city. It is packed with banks, shops of all possible uses and catering facilities. It is named after the mountain Ilica (Vilica), which is also located in Croatia.

This website uses cookies to improve your experience while you navigate through the website. Out of these cookies, the cookies that are categorized as necessary are stored on your browser as they are essential for the working of basic functionalities of the website. We also use third-party cookies that help us analyze and understand how you use this website. These cookies will be stored in your browser only with your consent. You also have the option to opt-out of these cookies. But opting out of some of these cookies may have an effect on your browsing experience.
Necessary Always Enabled
Necessary cookies are absolutely essential for the website to function properly. This category only includes cookies that ensures basic functionalities and security features of the website. These cookies do not store any personal information.
Non-necessary
Any cookies that may not be particularly necessary for the website to function and is used specifically to collect user personal data via analytics, ads, other embedded contents are termed as non-necessary cookies. It is mandatory to procure user consent prior to running these cookies on your website.
SAVE & ACCEPT